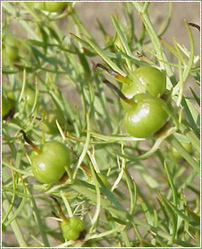 Uses : Desptie its history as a euphoric and purpotedly aphrodisiac herb, harmula is little used in contemporary western herbal medicine due to potentialtoxicity. The treat have to be taken to treat eye disorders and to increase the colume of breast milk production. Antitumor, Antiviral, Antibacterial, Aphrodisiac, Aromatic, Dye, Economic, Medicinal, Psychotropic. Peganum harmala is an entheogen proposed as the sacred Zoroastrian (Vedic) plant Haoma (Soma).The plant is used traditionally as an emmenagogue and an abortifacient agent in the Middle East and North Africa. The fruits of Peganum Harmala are the source of a red dye and an oil. The esteem in which Peganum Harmala is held amongst peoples of the East is extraordinary. Most commonly it is used as an incense. Although there are repeated but vague reports of the employment of Peganum harmala as a traditional hallucinogen, its actual narcotic use in inducing visions has not yet been established beyond a doubt. It certainly has some mindaltering effects including sedation. It shows antibacterial activity and is fairly effective against Protozoans. Its decoction is given for laryngitis. It helps against boldness, period aches, worms and lice.