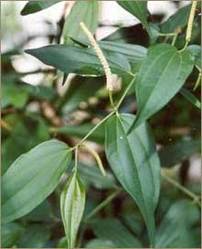 Uses : These berries are promptly and diffusely stimulant, especially influencing the kidneys and bladder. They are principally employed in gleet and sub-acute gonorrhea, but should never be used in the inflammatory stage of these or any other maladies. From their warming action, they have been used in atonic dyspepsia, but mostly as a stomachic with true tonics, and their use in gonorrhea is as valuable for covering the disagreeable taste of copaiva, as for their action on the kidneys. Large doses are said to produce headache and dizziness, probably from the augmented cerebral circulation. A tincture of cubebs may be prepared by macerating (or percolating) four ounces of the berries with a quart of diluted alcohol of which half a fluid drachm or more may be used as a dose. A fluidextract is sometimes prepared by treating a pound of cubeb powder in a close percolator with ether till a quart has passed, distilling off a pint and a half of the ether and spontaneously evaporating the remainder. A brownish or greenish oleoresin remains, of which from five to fifteen drops may be given on sugar. Berry is considered a carminative, diuretic, expectorant, stimulant, and antiseptic. Cubeb Berry has been shown to be effective in easing the symptoms of chronic bronchitis. It is also used for digestive ailments and is effective in treating dysentery. Cubeb Berry also has a local stimulating effect on the mucous membranes of the urinary and respiratory tracts. The herb has often been associated with the reproductive system and has been used to treat cystitis, leucorrhea, urethritis and prostate infections. Cubeb oil is effective against influenza virus and Bacillus typhosus. It is good stimulant of the body organs due to presence of astringent and bitter taste.